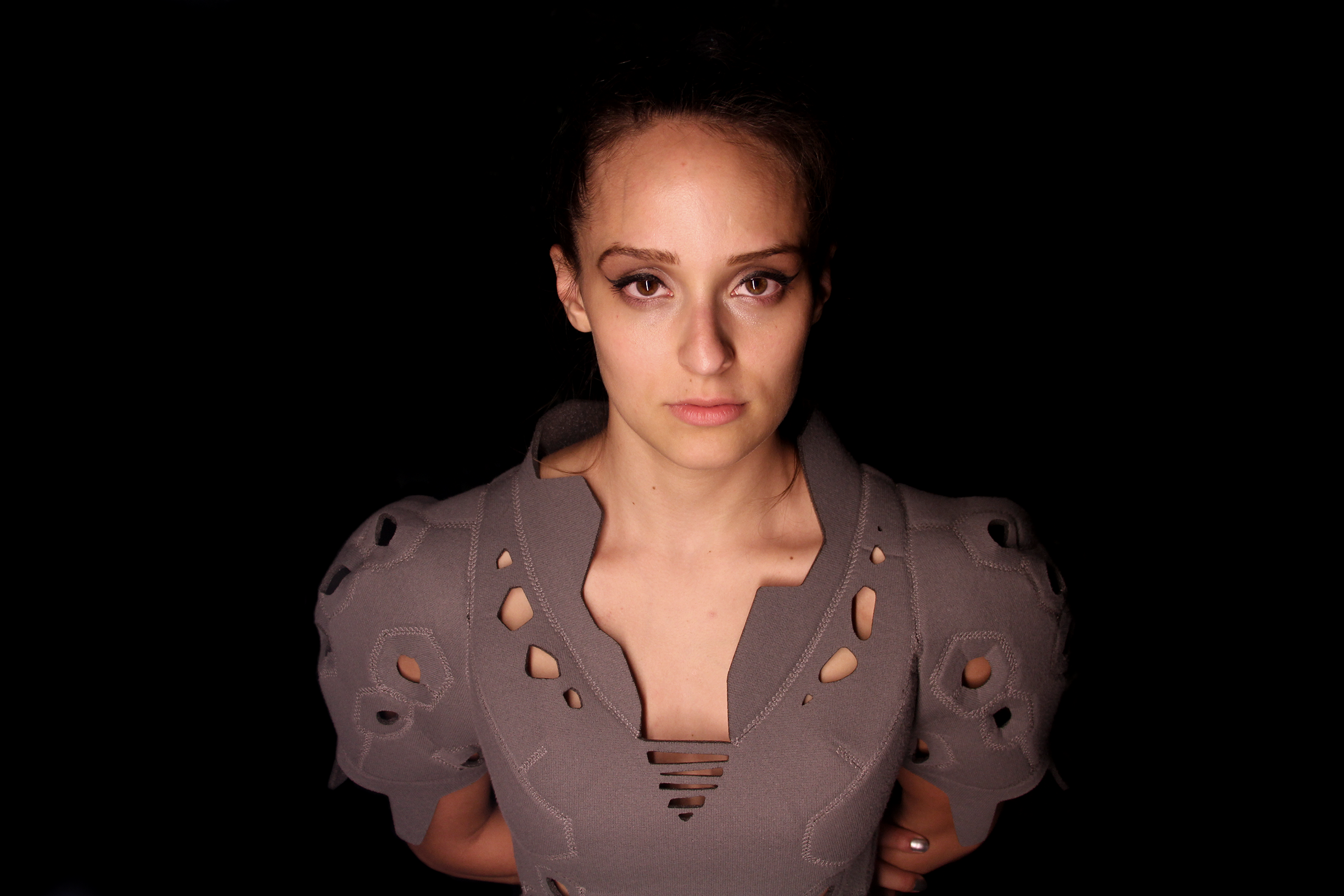 Fashion, as an industry and idea, is colliding with Technology. I am very interested in the clothes that people wear and the bags they carry: how these products are made, what functions they serve, how they perform. The integration of electronics in fabric products and advances in the construction and manufacture of garments has the opportunity to reshape the aesthetics, industry, and even economies.

Here I’ll chronicle some of the work I’ve done, finished and unfinished, old and new, that falls into this space.

My first attempt at building fashion technology was in 2010 during my freshman year at Carnegie Mellon. I built a jacket that displayed the user’s heart rate data with pulsing LED’s. This data was gathered by picking up the signal from a polar heart rate monitor. It’s very RoboCop. An ultrasonic range finder would sense any people or cars approaching from behind, and notify the user via vibrating motors.

My second attempt at fashion tech was in the summer of that same year (2010). I explored ways of augmenting a backpack with sensors and lights. I designed and built a backpack/messenger bag from scratch. The backpack’s many electronic features are called out above. I also planned to build a companion remote to the bag. Unfortunately, most of these features went beyond my technical reach at the time and the construction of the bag itself became a challenge.

More important, however, is the fact that most of these features were solutions looking for a problem and many of the technologies, while functional, were not practical. For example RFID readers can scan only one tag at a time. The most compelling design work that came out of this project was not the technology at all, but simple design changes like pocket placement, and graphic cues.

The skills I picked up working on the smart bag led me to Disney Imagineering Research Pittsburgh under the direction of Ivan Poupyrev. The Interaction Design team was wrestling with embedding motors into soft chair pads in order to demonstrate a new method researcher Ali Israr had invented for creating haptic sensations. I spent the next 3 years working part and full-time for Disney on this project.

You can read more about the Surround Haptics Vest here.

You can read more about the Surround Haptics Demo here.

You can read more about the Vybe Gaming Pad here.

In working on the fashion line Bioflux, I was able to scratch the surface of what I believe is the most fruitful path for fashion and tech:  using digital design and fabrication to create new design aesthetics and custom clothing. This project focused on taking cues from nature in order to achieve this goal.

While attending Carnegie Mellon University I designed for and eventually produced the student-run fashion show Lunar Gala. I detail this work here. As a producer, one of my main goals was to integrate technology into the show in a manner that highlighted the type of work being done on campus. We collaborated with video artists to create graphics for the show, with designers and developers to create a live-updating show program for smartphones, and teamed up with the Robotics Institute and used their newly developed 360 camera to create 3D scans of models and looks.

You can read more about this project here.

The most recent work I’ve done involving embedded electronics is simply for fun. I focused some personal time on sewing myself a leather jacket, one that would allow me to be seen in the pitch-black desert. Learning to sew leather was a challenge. In addition, while the electronics were simple enough to install, making them capable of withstanding the dessert proved much more difficult. The large LED display has survived two years, but the LEDs illuminating the body of the jacket lasted only a few days.